Once you have planned to travel to Jaipur, we have some interesting details for you while you go for your excursion to Jaipur from Delhi.  Let’s start to discover Jaipur Travel Guide.

Jaipur, Jai,’ victory ‘and pure,’ city, is the capital of the Indian state of Rajasthan, in a basin protected by the chain of Aravali.Unlike most human settlements in the Indian subcontinent, where the smallest village is often more than 2,000 years old, Jaipur is of recent foundation: it is the work of Maharaja Jai ​​Singh II, a Rajput of the Kachhwaha family.

On a historical level, the city of Jaipur owes its name to its founder, an astronaut and warrior named Jai Singh !! Particularly, this warrior ascended the throne when he was only 11 years old. The construction of Jaipur is recent. Indeed, following excellent and unprecedented economic boom, the old capital of Amber, which is 11km away cannot accommodate everyone.

Lets take you back in time for a bit. We are in 1727 and the idea of ​​building a new city is germinating. The construction of Jaipur is a novelty in North India because the cities in this continent are thousands of years old. But with Jaipur, there will be the construction of a new city and it will be planned, everything is symmetrical.

Some important information that might help to prepare your trip to India and solo traveller in India.

The maharaja called the Bengali Brahman Vidyadhar Bhattacharya to design the city, founded in 1727 and whose main works – main palaces, avenues and central square – will last for years. Located at the foot of the Árâvalli Mountains, it follows a three-by-three checkered plan and is surrounded by a wall 6 meters high and 4 meters wide. The entrance to the city is through eight gates. The original Jaipur had wide avenues 34 m wide, the rest of the streets making up the grid being at least 4 m wide. The shops also follow a standardized size, an astonishing rigor in the Baroque chaos that reigns in most cities of the sub-continent. 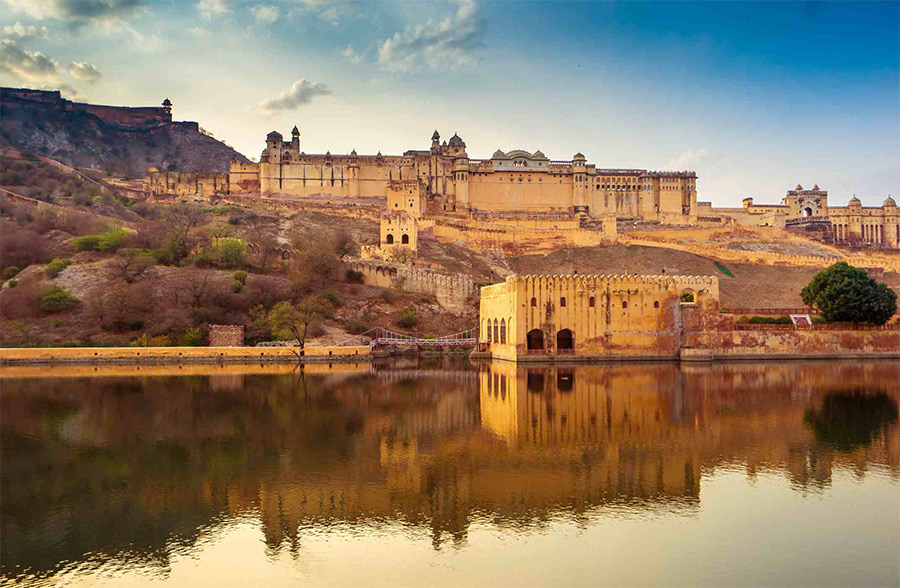 Originally, the city was not the uniform pink we currently know, but offered a wide palette, mainly gray with highlights of white. In 1876, the new Maharaja Ram Singh painted the entire city in pink to welcome the Prince of Wales, the future Edward VII. This pink color is also seen in India as the color of hospitality. Since then, it has kept that color and is nicknamed the pink city.

The ruling dynasty of Jaipur provided the Mughal Empire with some of its most distinguished generals. Among them, we note Râja Man Singh I, who fought at their service in Kabul and Orissa; the Raja Jai Singh I, better known by his imperial title of Mirza Raja Jai ​​Singh I, and who assisted Aurangzeb in all his Deccan wars, as well as Maharaja Jai ​​Singh II, or Sawai Jai Singh II, famous mathematician and astronomer, and founder of the city of Jaipur where he moved the capital from Amber. In 1727, the city of Jaipur (Jayapura) was founded and this is where the state takes its name from. 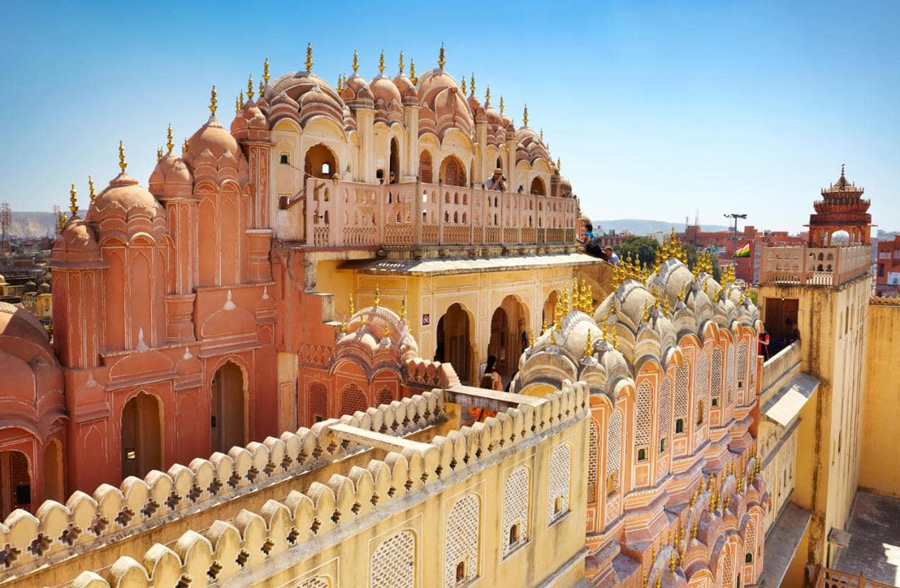 The City Palace of Jaipur

The Jaipur City Palace, consisting of the Chandra Mahal Palace and the Mubarak Mahal Palace, is a complex located in Jaipur, the capital city of Rajasthan, India. The first constructions were made at the initiative of Jai Singh II between 1729 and 1732, when the external walls were built. Successive additions were made thereafter until the twentieth century by various leaders. Located in the north-east of the city, it includes an impressive amount of courtyards, gardens and buildings.

The credit for beauty of the complex is mainly granted to two architects, Vidyadar Bhattacharya, chief architect of the royal court, and Samuel SwintonJacob . The complex is the seat of the Maharaja of Jaipur , head of the RajputsKachwaha clan .Part of the Chandra Mahal Palace is dedicated to a museum, but most of it remains a royal residence

Among the works is the Diwan-i-Khas, place of private audiences of the maharajas. The building exposes two enormous silver jars called Gangajelies. Made by two goldsmiths, without any solder from 14,000 silver coins each, each Gangajeli weighs 345 kg for 1.60 m hight and 4.30 m in circumference. They were swept away by King Sawai Jai Singh II during his trip to England for the coronation of King Edward VII in 1902. Each jar carried 4,100 liters of holy water from the Ganges. 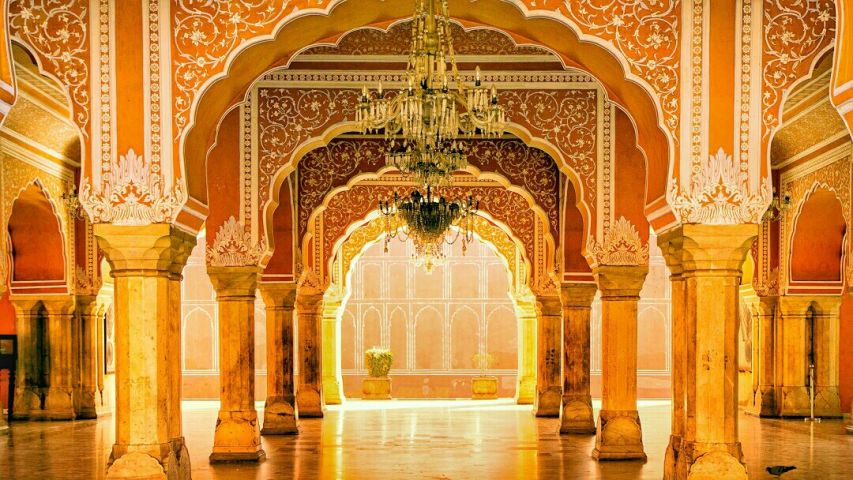 When you Travel to Jaipur don’t forget to visit JantarMantar. The JantarMantar in the tourist field, is an astronomical observatory established in Jaipur, Rajasthan, northwestern India. It consists of a series of astronomical instruments, built on the order of Maharaja Jai ​​Singh II in his new capital of Jaipur between 1727 and 1733. It is inspired by another observatory that Jai Singh II had previously built in Delhi , capital of the Mughal Empire. He also built three others at Benares, Mathura and Ujjain, but Jaipur is the most important.

The Maharaja Jaï Singh II never ceased to surprise the visitors with this strange construction, which was used at the time to calculate the position of the planets. The Indians do not decide anything without the “stars” being favorable to events. This observatory is made up of 17 buildings with unconventional shapes, and you will see a gigantic sundial.

The HawaMahal (Wind Palace) is an eighteenth-century building in Jaipur, the capital of Rajasthan, India. It is considered one of the wonders of Rajput architecture. This place is a must-visit while you travel to Jaipur.

Built in red and pink sandstone, the palace is on the edge of the City Palace of Jaipur and extends to the royal harem.

The palace was built in 1799 by Maharaja SawaiPratap Singh who was impressed by the unique structure of KhetriMahal, also known as the “palace of the winds” of Jhunjhunu, another city of Rajasthan. The palace of the winds was deemed to be the favorite place of Maharaja Jai Singh III.

The building was designed by architect Lal Chand Ustad on the model of the crown of Krishna, the Hindu god.The palace is a five-storey pyramid-shaped monument that rises to 15 m. The first three floors of the structure have the width of a single room, while the first and second floors have balconies in addition.

Its unique five-storey facade resembles the honeycomb of a hive with its – it seems – 953 small windows called Jharokha, decorated with intricate trellises, the jalis of stone or wood.

The original intention was to allow the ladies of the royal harem to observe the daily life in the street below, without being seen, because they had to obey strictly to the practice of “purdah”. These finely carved claustras, also allowed by venturieffect a relatively cooler air to circulate through the building during the hot summers of this region. 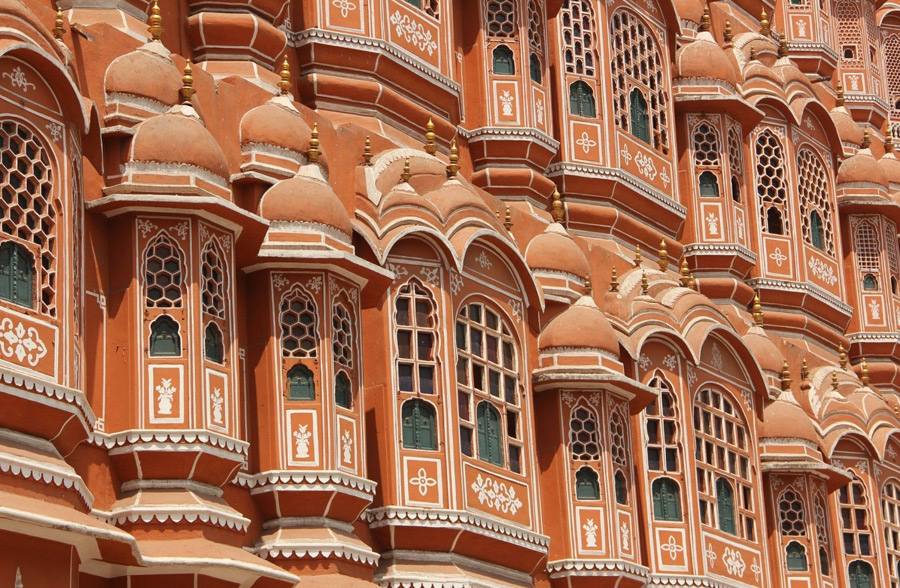 Amber Fort  is located in Amber,  11 km from Jaipur.in the state of Rajasthan. The fort that dominates Jaipur from the top of a hill, is the main tourist attraction. The city of Amber was originally built by Meenas and later developed by Raja Man Singh I. Enjoy short elephant ride towards the Amber Fort at the back of the Elephant

The Amber Fort is known for its characteristic elements of Hindu art. With its great ramparts and a whole series of paved gates and paths, the fort overlooks the main Maota Lake, which is the source of water supply from the site.The Amber Fort is also known as the Amber Palace,  encompasses what has been the home of Rajput Maharajas and their families for centuries.

The fort, along with two other fortresses, is located on the CheelkaTeela (Hill of the Eagles) which is part of the Aravalli range of hills. The forts of Amber, Jaigarh (in the North) and Nahargarh (in the South) are considered as a single complex, because they are connected by an extensive network of walls and fortified works. In the event of a threat, an underground passageway was planned to allow members of the royal family to pass from Amber Fort to Fort Jaigarh, which is much more formidable and even contains a cannon foundry. 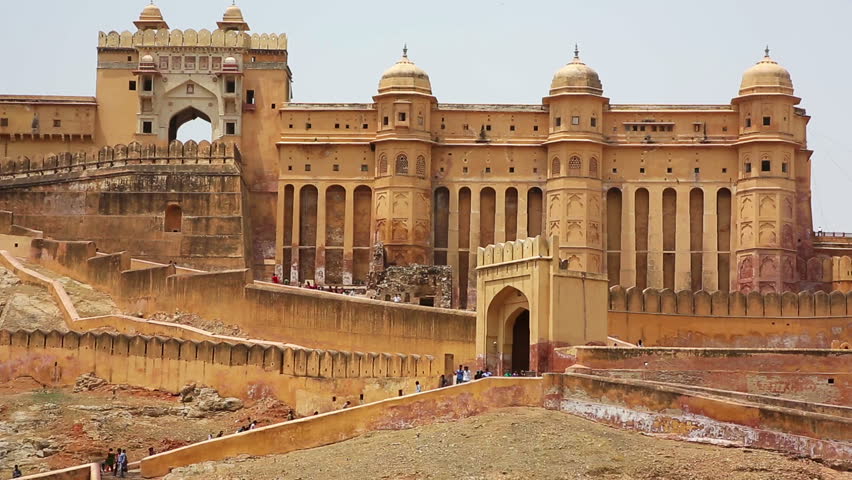 This site is almost as famous as Jaïpur itself. This palace is hung on the hillside, in this austere and semi-desert setting. You can enjoy its experience either on foot, or on the back of an elephant, whichever way you prefer. It is a military fortress, but you can still see the apartments of the inhabitants, still decorated with murals.

The palace was the residence of the Rajput Maharajas and their families. At the entrance to the palace, near Ganesh Gate, a temple is dedicated to the Sila Devi, the worship goddess of Chaitanya who  celebrated the victory of Raja Man Singh over Jessore Raja in Bengal in 1604 .

Where to Stay in Jaipur : Our recommendations : Jaipur travel guide

Our highly recommended trips with Jaipur