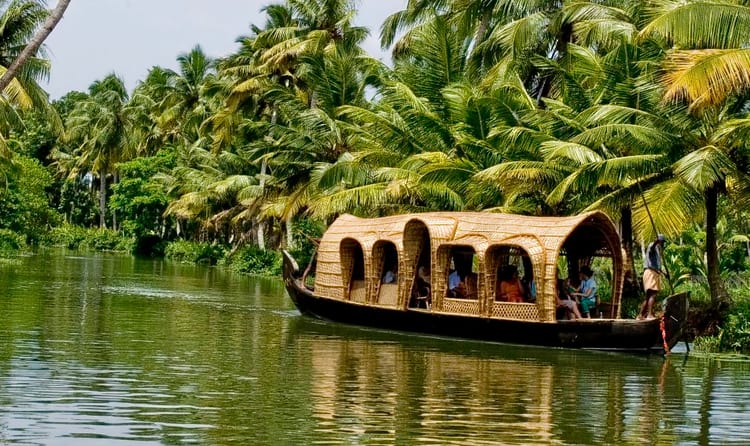 Visit Kerala, one of 13 National Geographic Traveler paradises on the planet and a serenely beautiful South India’s state. Explore this picturesque destination whose charm and grandeur is so magical it’s aptly christened ‘God’s Own Country.’ Mythical Kerala, with all of its rareness, beauty, and lure, is a getaway with all an adventure-thirsty vacationer would ever ask for. From the tranquil backwaters, the scenic greenery, and the gorgeous beaches to its rich art, cultural vibrancy and gourmet delicacies, it has them all. Contact us for your Kerala tour packages and one of our Indian expert will be in touch with you.

Kerala is arguably the only state where you’d enjoy your Ayurvedic massage, far from the crazy, chaotic happenings that are a norm all across India. Stop by Thriuvanthapuram, Kasargod, Malabar, or Travancore-Cochin and you will be surprised by how it’s devoid of the crazy traffic, incessant honking, and street beggars.

A state of many wonders and delights; lovely, charismatic locals, exquisite sights and sounds and yet never overrun by tourists, Kerala is perfect for a tour. It has tons of spectacular must-sees, adrenaline-pumping adventure escapades, delectable cuisine, and fun festivals. And with Kerala Holiday packages, you will have all of them to explore, all by yourself.

More specifically, Kerala tour packages is a license to discover what this magical 38,863sq km, 33 districts state rated India’s cleanest state has in store. It’s a vast, soul-soothing enclave with history-rich cities, a fascinating backstory, and festivals you wouldn’t wish to miss.

And so, touring Kerala, you wouldn’t want to miss a trip on the serene backwaters aboard a boathouse or an adrenaline-filled boat race. It’s also the only state where it is fun exploring the lush greenery of tea, exotic herbs and spice plantations, some native to the region since 3000 BC.

Kerala Tour packages also give you a chance to tour the Western Ghats Mountains, a UNESCO World Heritage Site, and the 600km long glorious Arabian coastline. Touring all these, plus the state’s killer landscapes, exotic wildlife, and Ayurvedic sessions – a 5000-year-old traditional science regimen, easily sums up an incredible outing.

Kerala is a conglomerate of traditions, art, and culture. It is a beautiful blend of Aryan and Dravidian cultures that now form part of the vibrant festivals. Ideally though, the state of Kerala is a result of the 1956 merger of Kasargod, Malabar, and Travancore-Cochin.

After it was beleaguered by Chera King Senkuttuvan who was later overcome by Parasurama, an intrepid axe-wielding warrior, many powerful empires ruled Kerala. It was until the arrival of the European explorers that the monarchies finally lost control of this vast state. The four merged in 1956 and gave birth to this wonderful state.

Visit Kerala – Things to Do

Choose from your preferred Kerala Holiday packages and go have an outing to remember. Some of the adventure activities on offer during your tour of Kerala include:

Floating in the serene backwaters

To enjoy the best of your Kerala tour packages, start by enjoying a breathtaking tour of this colorful state aboard a boathouse. Exploring this relaxed network of waters on ancient Kettuvallams, cruising through charming villages, an experience you will never forget. It is an idyllic ride, distinctly soothing and relaxing.

Soaking in the sun in Arabian beaches

Kerala’s long coastline along the Arabian Sea, has lots of exquisite beaches. And for holidaymakers looking for a calm spot to escape into and avoid the noisy, chaotic Indian cities, these beaches are heavenly. On the golden sands of Kerala beaches are incredible spots to relax and bask in the sun. An Ayurveda massage on the beach is even more surreal!

Kerala is indeed a tropical symphony. Swathes of lush tea, herbs, and spice plantations dotting the hills of Kerala, along the Western Ghats, are not only scenic, but ripe for an off-the-beaten-path visit. Kerala tour packages always have almost unmissable trips to Munnar and Thekkady for a reason – so that tea and spice enthusiasts understand where their favorites come from.

In ‘God’s Own Country,’ there are lots of must-sees during an Indian wildlife safari. From visiting Periyar Wildlife Sanctuary to seeing Indian tigers, elephants, and bird-spotting in the wilderness, Kerala wildlife safari is easily one of the best in the whole country. All that is also heaped onto Kerala tour packages!

There’s no magical elixir that brings the body to its optimal balance holistically more than Ayurveda – sister science to yoga. Today, Kerala is home to hundreds of spas and resorts offering Ayurvedic massages, especially in Alleppey and Kumarakom. They are equally part of the thrill served in this state and each of these therapeutic sessions works like magic!

Enjoying the best of Kerala’s dishes

Food holds a profound place in the culture of the locals. And that’s why, to ensure that tourists have a vacation to remember, Kerala holiday packages also include sampling local delicacies. But be warned; much as they are fresh and tasty, you should expect lots of spicy food cooked with a bit of coconut-based ingredients.

When is the best time for your Kerala tour package

Being a hot holidaying destination, Kerala registers millions of tourists every year. Munnar teems with fun-hungry vacationers during summer, but the best time generally is during winter when the weather is moderate with fewer rains.

Summer season, which runs from April to August, tends to be sizzling hot and reasonably unfit for any form of outdoor adventure. September, however, ushers in the season to sample the backwaters. Winter, however, gets the entire state alive with throngs of fun-lovers visiting to enjoy Kerala’s charm before it ends in March.

Kerala tour packages run throughout the year, including monsoon season when rains are pounding the state and roads are impassable. During this period, tourists are fewer and areas of interest are relatively open and easy to access. It is also the best time for Ayurvedic treatments as skin pores are open.

The Best Way to Reach Kerala

Before choosing your preferred Kerala tour packages, you must be aware of the three means of reaching the state. You can fly into any of the three international airports within the state – Thiruvananthapuram, Kozhikode or Kochi.

For a little adventure, don’t hesitate to opt for the train. The state has about 200 stations, including the main ones in Kochin and Trivandrum. Trains also allow easy commute within the state and when you need to visit other cities outside Kerala.

Using the road is far more adventurous and give you the freedom to enjoy your tour of Kerala to the maximum. You also have several alternatives to choose, including renting a car, using a bus of opting for a taxi. Generally, major roads in Kerala are in great quality so you’ve got nothing to worry about.