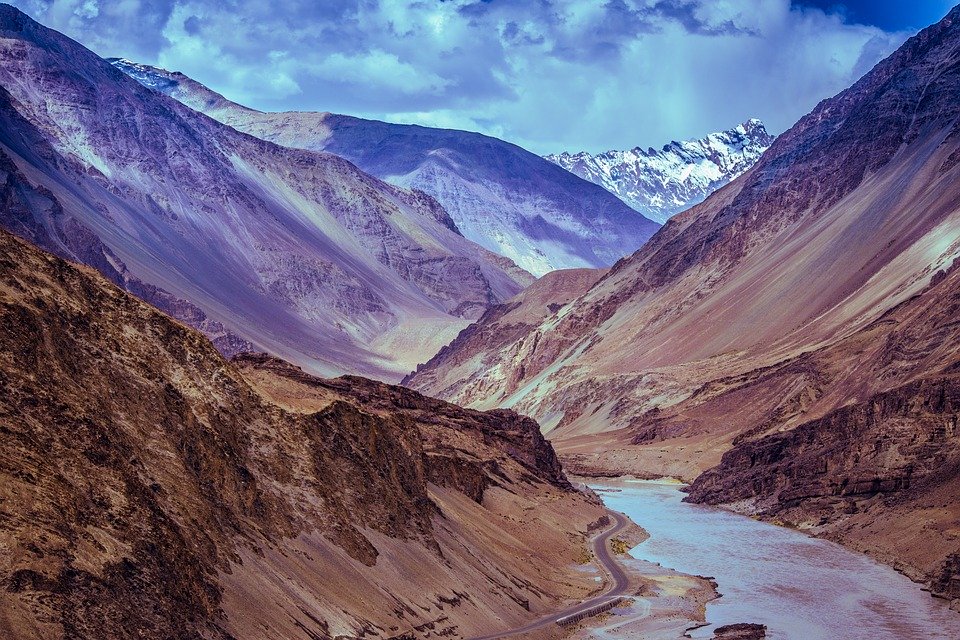 Discover the almost supernatural landscapes of jagged, arid mountains, remote outposts, and Indian-Tibetan Buddhist monasteries. Choose and explore the mystical, sparsely populated Buddhist ex-kingdom of Ladakh for a terrific, adventure-filled holiday.Visit Ladakh with the special, expertly-curated Ladakh tour packages for a taste of thrill, different from any ordinary Indian outing expedition. Spend a day with the red-robed monks; take a shot of the picture-perfect gompas; or, stroll around the beautiful golden Buddha and the artistically-painted murals!

Suggestions of Holiday Packages for Ladakh

Tour the arid, spectacularly jagged Ladakh where throngs of tourists and adventure-hunters land to quench their thirst for the thrill. This little corner of Tibet isn’t a cherished dream destination for no reason. Looking at the scenic, vast, and desolate hills and valleys plus trekking through the massive, snow-capped Chadar is an experience with no match.

This barren beauty with clean azure skies is a little-know, virgin must-visit for trekking and mountaineering heartthrobs. Lakes and mountains aplenty, Mahayana and Hinayana monasteries and a people not yet in touch with modernity, Ladakh is calling.

Travel packages for Ladakh make the whole outing relaxing and rejuvenating yet memorable and adrenaline-filled. Choose your preferred Ladakh tour packages and discover the land of Buddhist monasteries – a different serving of adventurous India.

Leh, the heartbeat of this magical destination, is where fun and merriment comes alive with lots of tasty, authentic Tibetan delicacies and dance. Fly to this city and kick off your Ladakh tour, making sure you tick off the following on your bucket list.

Pick your preferred Ladakh tour package and have an adventure-filled holiday in Ladakh. From sighting Indian leopards in the wilderness, water rafting or hiking the world’s tallest mountain ranges or driving through Khardung La Pass, it has them all.

For many, Ladakh is easily the best destination for an adrenaline pump. And there are several choices, led by Chadar Trek expeditions, a relaxing climb up the jagged mountains of Ladakh, and walking on the frozen Pangong Lake.

Perhaps there’s no destination with panoramic, breathtaking sights that equal those of Ladakh. It is a little paradise, tucked in the middle of the Himalayan Karakoram mountain ranges, but with some of the unreal sights.

From afar, the colorful sand crystals of the barren landscape look surreal and indescribably gorgeous. A visit to the crystal blue gracefully flowing waters would leave your mouth wide open while the snow-capped mountains and the lovely-looking monasteries have no equal. Ladakh is beautiful and exactly the most ideal spot for nature lovers looking to break away from their ordinary settings.

Ladakh unmistakably is festival-lovers’ paradise. Millions of fun lovers throng this little haven, always looking to get loose in the Hemis fanfare and festivities. And the region never disappoints; it serves unlimited thrill during all the major festivals.

There’s no better way to indulge in the festivities than with Ladakh tour packages, especially during Dosmoche, Phyang, and Tak festivals. One incredible thing with these unmissable events is how each has its uniqueness. Generally though, be sure you will participate in at least one of them at any given time of the year!

As if the Masked Lamas dance isn’t exciting enough, trekking the charming Himalayas is an unforgettable adventure. The majestic Everest isn’t for the faint-hearted, but it isn’t the only spot for an incredible outing.

If you’ve always wanted to give mountaineering a go, then Ladakh will be more than happy to get you in the mood. Conquer Nun-Kun, Jang Yatse, or Stok Kangri and leave lasting memories of this magical destination. But if trekking isn’t in your DNA, maybe renting a motorbike and cruising through Kardung, Namshang La, and Tanglang La is.

Ladakh has more gompas and monasteries per square kilometer than any other place in the world. From the larger-than-life Hemis Monastery to Thikshey, Matho and the other little-known ones, it has so much you would easily be spoilt for choice.

For a thrill-seeker, eager to learn more about these marvels or even take part in Buddhist rituals, both the Mahayana and Hinayana ones have tons of information. They have well-kept manuscripts, antiques, treasures and rare finds, all on display. Other must-visits include Stakna, Alchi and several others.

To Relax, Recharge, and Rejuvenate

Ladakh and relaxation are synonymous with each other and regardless of where you visit, the whole place is just ideal to unwind. The natural landscape is breathtaking, while the monasteries are where you can meditate and loosen up. Early morning walks are equally refreshing.

The serenity of Pangong Lake

If exploring the picturesque landscape or the beautiful Leh doesn’t get you in the mood, the serenity of the scenic Pangong Lake certainly will. It is an incredibly serene and breathtaking lake and possibly the only one that changes its color throughout the day.

Lake Pangong isn’t an ordinary spot where you only visit on one lazy afternoon. Summertime, the lack is abuzz with campers pitching a tent on its shores while winter attracts thousands of thrill-seekers for a walk on or even drive their cars on the ice covering the entire lake. Both seasons are fantastic!

Ever wondered what snow leopards look like from a distance? Or, how mountain wolves survive the harshness of the barren mountains during winter? Well, you only need to pick the right Travel packages for Ladakh and discover more than that.

Ladakh has some rare wild animals and it would be a chance to see them. It’s often during winter that sighting blue sheep, magpies or the marauding mountain wolves becomes possible.

Across India, Ladakh holds a great place among lovebirds, especially because of how exotic and serene it is. Many of the resorts in Leh are also cheaper and a lot more affordable and thus give them a huge reason to camp and rekindle their love lives.

When and How to Visit Leh Ladakh

To explore Ladakh and marvel at the endless, desolate hills and valleys, or visit the monasteries, one only needs a carefully-planned Ladakh tour package. Summer is always perfect for a visit, essentially because of the pleasant weather and the vibrancy of the cities and the festivities.

Winter also gets Ladakh abuzz, although it mainly attracts the gallant ones. Ideally, winter’s snowy landscape and the region’s freezing-cold conditions make many shy away from traveling to Ladakh unless visiting for the Chadar-Treks or the frozen Pangong Lake.

The best times to visit Ladakh vary. But if you would like to explore this enclave, don’t worry because we’ve got you covered.

April marks the start of summer and consequently the start of the high season. By May, resorts and hotels will be registering increasing bookings. At this period, the critical Srinagar-Leh highway will be opening up. One great benefit of visiting Ladakh during this short period is the crazy discounts on accommodation and the fewer number of tourists foraging through the areas of interest.

With the all-important Srinagar-Leh highway open and snow-free and summer finally starting to be felt, Ladakh in June is alive and ready to receive thrill-seekers. The first few days of the month aren’t always the best for traveling through Manali-Rohtang Pass.

But generally, the dramatic views of the snow-walled Rohtang and Baralacha Pass are enough to get an adventure-filled outing started. Towards the end of July are when lots of caution is emphasized, especially because of the rapidly melting snow-walled roads.

As the monsoons return in full swing, Ladakh becomes charming again. Rivers, once again, flow with gusto and, amidst the adventure of rowing and kayaking, lots of caution becomes necessary. In and around Leh, the August-September period means there’s less rain.

During this period, the ancient monasteries and other attractions within the city fill up with tourists. Areas beyond Zoji La Pass are, however, a no-go-zone, particularly because of the landslides.

By mid-September, the whole of Ladakh will be swelling with tourists from all over the world. All the picturesque spots, hiking trails, and even the resorts all across the region will be fully booked as high season peaks. Ideally, this goes on until October when Raid-De Himalayas Rally opens up and disturbs the vacationers’ magical adventure escapades.

Low temperatures quickly take over with the whole place experiencing sub-zero temperatures. It is also the time when holiday-makers end their vacations. Srinagar-Leh and Manali-Leh highways start to get frozen and inherently become dangerous to drive through.

This is the low season and the coldest period in Ladakh. The main roads connecting Ladakh to the rest of India are cut off. The only adventure in this period is the famous Chadar trek which kicks off from January and happens through to March.

By road, Ladakh is equally accessible. The 434-km Kashmir Valley road offers some of the most satisfying trips, while the Zoji-La Pass that snakes its way through the Himalayan range, is equally reliable. The only disadvantage with these routes is the fact that they only open up from May to September.

To access Ladakh by road, there’s the 473-km Manali-Leh road which opens from mid-June to October. Some of the adventure must-sees driving through this road include the desert plateau of Rupsho and the world-famous Taglang-La motorbike road.

But, while there are no railroads in Ladakh, road users never run out of adventure. It’s often a long, daunting journey, but with plenty of sights and sounds. It’s also one of the adrenaline-pumping experiences!