Travel guide to visit Mysore : All you should know about Mysore, The City of Royals

A city located at the southwest of India in the Karnataka state, which was originally the capital of the Kingdom of Mysore from 1399 up until 1947. Rich in history Mysore has many attractions. Soaked with the variety of cultures and religions, Mysore has been the center that blends the Hindu, Muslims, Gothic and Rajput styles. This is why it has so much variety to offer as each ethnicity and religion brought a unique color and shaped the way Mysore turned out after so many years. Famous for the Mysore Palace that was used by the Wodeyar Dynasty, when it was their regime. Visit Travel guide to visit Mysore to get all important information on Mysore. 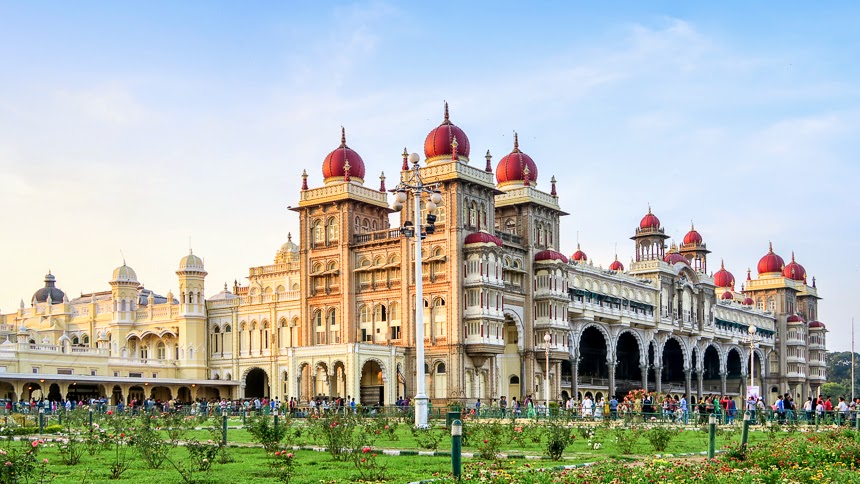 A place with such rich history that it housed dynasties and a palace surely has something of much greater value to offer. The fact that it has beautiful and eye captivating buildings and majestic palaces is just one part of this historic city is well known. The lesser known fact about Mysore is that it has been named as the ‘second cleanest’ city of India. It also comes as much surprise that it has many other tourist attractions such as Mysore Zoo, Chamundi Hills, Karanji Lake and even Brindavan Gardens.

Since Mysore has these mesmerizing buildings and gorgeous gardens along with stunning waterfalls and lakes, lush green sandalwood forests and many yoga centers which makes it one of the best tourist destination in Karnataka. Due to its versatile nature, Mysore has been given quite a few different names like, ‘City of Palaces’, ‘Sandalwood City’ and even ‘City of Yoga’. With so many options for tourists, this city has been host to them for a very long time. People continue to visit Mysore during the vacations. Being the capital of Karnataka, it houses many historic buildings, sites and even monuments which have been developed into libraries, gardens, parks and even museums.

Your travel guide to visit Mysore :  Everything Mysore Has to Offer:

If you have been indecisive about where your next family vacation or a trip with friends should be, Mysore would make a great and memorable holiday trip. Following is the list of a few places you should definitely visit.

This royal and historic structure was built in the year 1897 and is said to one of the largest palace in all of India. Wood has been used to build the palace in an Indo Saracenic Style using very sophisticated craftsmanship. The fact that this palace looks gorgeous during the day time and in the evening cannot be denied. Once home to the royal family of Wodayars, the Mysore Palace now is illuminated using 98000 electric bulbs.
Being at the center of the city it seems like the roads that lead to it are actually radiating from it. It is also said to be the heart of the Mysore city. The palace has an interior like none other. Richly carved wood and stone gives the place an intricate, colorful and architectural thrill. It is from this magnificent place that the Wodayars ruled the Mysore Kingdom. They are also referred to as the Maharajas of Mysore.

The palace has about 500 years’ worth of history, being a home to different families, seeing many lead and sometimes fail. The building you see now has been renovated. 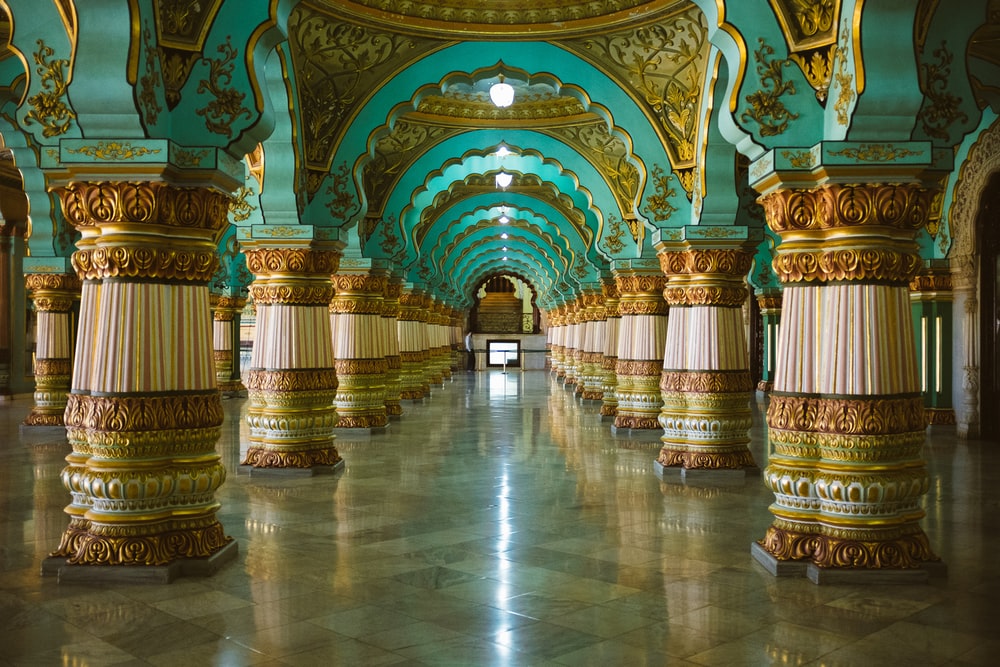 These gardens are located near the Mysore city and are approximately 19 km away from the center of the Mysore Palace. A magnificent piece of architectural and master of engineering is displayed by these gardens. Brindavan gardens are built near the Cauvery River and just beneath the Krishnaraja Sagar Dam. This beautiful piece of architectural masterpiece which is a major tourist attraction was built by Sir Mirza Ismail and Sir M. Vishweshwariah.

The major tourist attractions are the fountains and the botanical gardens. They offer boat rides that are in the lake which is situated in the garden. A word of advice is that if you want to see the real beauty of the gardens visit it after sunset and you will see the mesmerizing show of the fountains. The Brindavan Garden have a very beautiful designs and terrace gardens that are clustered around the topiaries and gazebos are one of the places of interest of this garden. This botanical park, which was constructed in 1932 has a few musical and colorful fountains. In short these gardens are sprawling with beauty and amazing sights just waiting for you to enjoy these mesmerizing views.

Another tourist attraction in the Mysore city is its zoo. Especially for children of young age and for animal lovers this place is a sight that should not be missed. This zoo was originally named Shri Chamarajendra Zoological Gardens. This was a place for a huge range of animals and birds from all around the world. The good thing is that it is well kept and well maintained. Since it was constructed in the year 1892, it is among the oldest zoos in all of India. There are many stories of animals mysteriously dying in the zoo. Though it was later found that some staff members were the culprits of the killings. Some of the zoo area has been donated to the museum as well. Still it is one of the largest, oldest and most popular zoos in the entire country.

There is a gorgeously built temple at the top of the Chamundi hills, called the Chamundeshwari Temple.This temple was built in the 11th century and was at that time dedicated to the Mysore royal family. It was actually built to praise the ancestral goddess of that time. A word of advice, visit during the weekdays to avoid a large crowd.

If you ever visit Mysore city, you must (emphasis on the must) visit the beauty that is the Karanji Lake. Spread over the area of 90 acres and is located at the foot of the chamundi hills is a place every tourist visits. Especially when people visit the Temple, this lake is the next place they see and its beauty just pulls everyone to look at it. The Karanji Lake is a haven around 147 species of gorgeous migratory birds. Just imagine, a vast blanket of clear blue water all covered with a huge number of beautiful and colorful birds. This lake promises a beautiful view and good memories to take home.

Who doesn’t know the name of the legendary emperor Tipu Sultan and his gallantry? The palace where Tipu Sultan resided has to be as legendary as the emperor himself and if you visit it you will not be disappointed. The fort is situated close to the crowded Krishna Rajendra City market. Tipu Sultan’s palace is also known as the “Abode of Happiness”.

This fort is a very prominent landmark of the city which depicts a very sophisticated and elegant Islamic style architecture. The great emperor names his palace “Rash e Zannat” which means “envy of Heavens”. This fort was opened to the public in the year 2005. 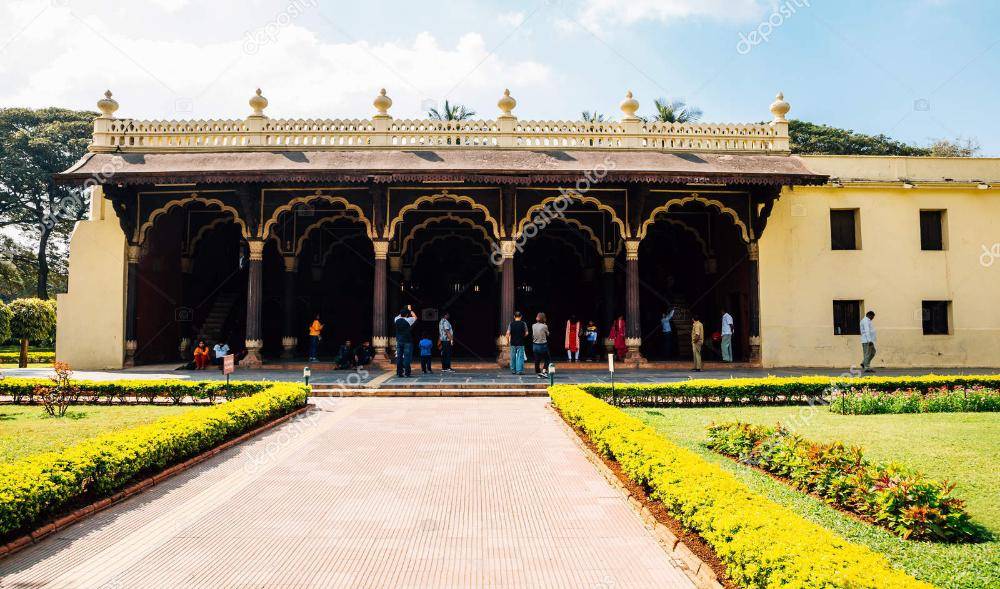 This will not be an exaggeration when I say that Nagarhole national park is one of the best national parks to visit in India. There are a number of reasons to visit this national park, one major reason being the wildlife it has. It is home to

How to Get to Mysore City:

Mysore city has an airport, also called the Mandakalli airport. It is a domestic airport that is situated at a distance of 14 km from Srirangapatnam. However this is not an international airport. You can reach Mysore from any other city of the country.

If you are worries about how you will reach Mysore, you should not worry, as it has a railway station situate in the heart of the main city. Plus it is a convenient ride to travel by train.

Mysore is very well connected by road to nearby cities.

Distance from Bangalore to Mysore 145 Kms

Hassan to Mysore is 130 Kms

What are you waiting for, go and visit this beautiful city during your next vacation. When foreigners are visiting it why can’t people form this country.