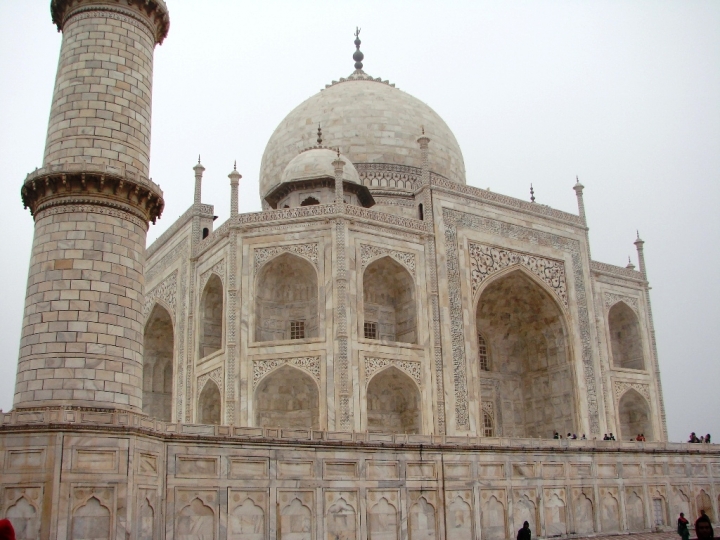 Planning a trip to Agra ? here we have listed the best places to visit in Agra

Agra is around 200 Kms from Delhi in the north. It is located right on the bank of Yamuna river and is one of the most important cities of Uttar Pradesh. The reason being its numerous Mogul era buildings notably Taj Mahal, Agra Fort , Tomb of Itmad Ud Daulah and Fatehpursikri Sikri. It is a major tourist destination in India. Agra is a part of Golden Triangle tourist programme along with Delhi and Jaipur. Go through our Travel guide for the best places to visit in Agra

Agra’s history goes back to the Afghan Sikandar Lodi (1488-1516) who seized the throne of Delhi and chose Agra as its capital in 1502. Babur, after defeating the Lodi, Sultans of Delhi, in 1526, stopped his conquests in Agra. Afflicted by dust, drought and heat and feeling nostalgic for the sweetness of Persian gardens. He built a magnificent Mogul garden, Ram Bagh (or garden of rest, still visible today), and a replica of his Persian garden of Kabul.

Agra reached its peak under the reigns of Akbar, Jehangir and Shah Jahan who evolved its architectural tradition to the Taj Mahal, an ultimate perfection of Mughal art. After the departure of Aurangzeb for Delhi, Agra lost its splendor and became a small provincial town of British India.

Agra was the capital of the Mughal emperors only intermittently. For example, Babur’s son, Humayun, preferred Delhi, but his grandson, Akbar, third of the “Great Mughals”, choose Agra from the beginning of his reign. But he left it for FatehpurSikri, ephemeral capital abandoned for lack of water also known as the ghost town. Under Jahangir and Shah-Jahan, Agra was an episodic capital and Aurangzeb, last of the “Great Mughals”, moved the power of Agra to Delhi.

This is our complete travel guide sharing all the best places to visit in Agra We highly recommend that you take a guide services for an in-depth historical experience of these beautiful monuments.

Top places to visit in Agra

This majestic red sandstone fort is the work of Emperor Akbar, even though most of the palaces erected under Akbar were destroyed and replaced by other monuments. These monuments include the Diwan-i-Khas (private audience hall), the KhasMahal and the Sheesh Mahal (Palace of Mirrors), built by Shah Jahan who spent the last eight years of his life locked up by his son Aurangzeb, a mad fanatic. The fort of Agra perfectly illustrates the style born under Akbar, of the fusion between the Hindu and Muslim traditions and found in its short-lived capital, FatehpurSikri, and in its tomb in Sikandra. The Agra fort is a UNESCO World Heritage site.Until the capital was shifted from Agra to Delhi in 1638, Agra was the main residence of the emperors of the Mughal Dynasty.

For centuries, this luminous pearl of India has used all superlatives. The TajMahal, whose famous silhouette is the emblem of the country, is the most photographed building in the world and remains the most perfect structure ever built by man. Manifestation of the love of an emperor for his disappeared queen, the beauty of the Taj is impossible to describe. It is much more than a magnificent mausoleum of white marble whose ornamentation of the tombs is of perfect execution and the work inlay of exemplary beauty.

The Taj Mahal, which means “Palace of the Crown” in Persian, is located in Agra, on the banks of the Yamuna River, in the state of Uttar Pradesh. It is a white marble mausoleum built by the Muslim Mughal emperor ShâhJahân in memory of his wife Arjumand Bânu Begam, also known as MumtazMahal, which in Persian means “the light of the palace”. She died on June 17, 1631, giving birth to their fourteenth child, while she visited the country. She finds a first burial on the spot in the Zainabad Garden in Burhanpur. The construction of the mausoleum began in 1631 and was completed mostly in 1648. Her husband died on January 31, 1666, was buried alongside her.

The Taj Mahal is considered a gem of Mughal architecture, a style that combines architectural elements of Islamic, Iranian, Ottoman and Indian architectures.

The Taj Mahal is erected on the right bank of the Yamuna, among the pavilions of pleasure, the gardens of the princess and dignitaries of the Court of Agra, then capital of the Mughal empire. Its construction began in 1632, however, there remains uncertainty about the exact date of completion of the work but at the main entrance an inscription indicates that the construction was completed in 1648.
Materials were brought from all over India and rest of Asia to build this piece of Love. Elephants were used to transport building materials in the course of edifice.
White marble is mined from Rajasthan, jasper comes from Punjab, turquoise and malachite from Tibet, lapis lazuli from Sri Lanka, coral from the Red Sea, carnelian from Persia and Yemen, Deccan onyx and Persia, garnets from the Ganges and Bundelkund, agate from Yemen and Jaisalmer, and rock crystal from the Himalayas. In all, twenty-eight types of polychromatic fine or ornamental stones were used to compose the motifs of this stone parquetry inlaid in white marble.

The mausoleum of Itimad-ud-Daula is in the city of Agra. Art historians sometimes present this mausoleum as a “draft” of the Taj Mahal, which explains why it is called “little Taj” in the tourist literature.

This remarkable monument is located in a garden surrounded by a four meter high brick wall covered with stained plaster, with towers at each corner.The mausoleum was built at the initiative of Nûr Jahân, the wife of Jahângîr for his father Mirza Ghiyas Beg, who took the title Itimâd-ud-Daulâ – pillar of the state – when his son-in-law had abandoned him effective power over the empire. Mirza Ghiyas Beg is also the grandfather of Mumtaz Mahal, wife of Emperor Shah Jahan, both buried in the Taj Mahal.

The building was built between 1622 and 1628 on the left bank of the Yamuna, among the pavilions of pleasure, the gardens of the princes and dignitaries of the Court of Agra then capital of the Mughal Empire. It represents the transition from the first Mughal architecture using red sandstone with marble decorations – such as Humayun’s tomb in Delhi or Akbar’s tomb near Agra – and the second whose emblematic achievement is the Taj Mahal and the image of decadence the Bibi Ka Maqbara built by Aurangzeb in Aurangabad. In the middle of each side of the wall stands on the cardinal points a monumental pavilion of red sandstone inlaid with white marble (flowery motifs, bottles recalling the intoxication of the nectar of paradise), their symmetrical arrangement taking the traditional Persian mosques with their court at four iwans

Sikandra is entitled after Sikandar lodi, the ruler of Delhi from 1488 to 1517 who was in power.Located 4 km north of Agra, on the road to Delhi, Sikandra is worth a stop to visit the tomb of Akbar, an immense mausoleum in red sandstone surmounted by a marble pavilion. It differs from the monuments of Agra by its Hindu architecture associated with Indo Muslim architecture, the stone carved according to Hindu techniques and its decorative elements. The construction of this beautiful monument Akbar started himself. This structure has a perfect blending of Hindu, Christian, Islamic, Buddhist, Jain themes.

Enjoy visit of Agra in our Golden Triangle Tour

This city was founded by Mughal Emperor Akbar the Great in the year 1569 and it was abandoned after having functioned as the capital of the Mughal Empire from 1571 to 1585. 37 km west of Agra, can be visited from Agra or from Agra to Jaipur. Fatehpur Sikri is a splendid imperial city whose red sandstone buildings are in a perfect state of preservation.

Akbar rises to the throne at the age of 14, after the untimely death of his father, Humâyûn, in 1556. As soon as his power is assured, he dedicates himself to the foundation of his capital in Agra and the development of his Red Fort. However, as often for the leaders of India, Akbar wants to build a new capital city and chooses a site near Agra.

The emperor, without heirs, used to go to the village of Sikri where lived a Sufi hermit Salim Chishti (1480-1572) whose blessings he sought. Akbar’s visits bore fruit because he soon had three sons. To give thanks, he decided to build his new capital on the site.

Fatehpur-Sikri offers a unique blend of different architectural traditions. Although the general layout and design of the buildings conform to the Islamic model, the buildings themselves, mostly palaces, and their ornamentation, columns, flowered arches, carved decorations, have a strong Hindu influence, generally speaking, more especially the Gujarati and Rajasthani styles. There are a number of buildings in the Fatehpur-Sikri complex. Each of these small palaces has a specific purpose and usually faces a yard.

To help you plan the perfect vacation, we have gathered all the travel information for Agra that a first time visitor will need. Follow our thorough travel guide to visit Agra to ensure the best possible experience.